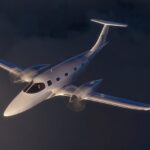 In the US, an aerospace company plans to build a passenger aircraft with green engines in a few years. US company Bye Aerospace has announced a new electric aircraft, the eFlyer 800. The aircraft will seat eight passengers and have a claimed range of around 930 kilometres, according to the organisation’s official website. The aircraft […]