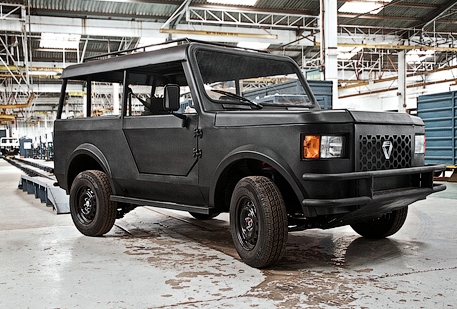 Kenyan company Mobius Motors has found the funds to launch the production of an affordable SUV priced from $10,000 designed specifically for driving on dirt roads in Africa. The bulk of the $50 million loan was provided by PanAfrican Investment Company, a private equity firm based in New York. But something else is important. Kenya has got its own car industry and its own car brand.
The manufacturer is now ready to launch the assembly of 50 Mobius II SUVs, the company’s only model. According to the brand, it has already received pre-orders for the vehicle, but their exact number is not specified. In addition, the funds raised will enable the development of another SUV, provisionally called Mobius III.

The Mobius II off-road vehicle is based on a steel tubular frame. It uses an independent MacPherson suspension at the front and leaf springs at the rear. Developers left the cars with a minimal set of body panels, giving up the side glazing and the rear door. The weight of the model is 1275 kg.

The interior can accommodate up to eight passengers (the rear seats can be folded down or removed from the vehicle). Ground clearance is 260 millimeters, payload is 625 kg, angle of entry and exit is 41 and 38 degrees, respectively. The SUV is equipped with a 1.6-liter petrol “four” rated at 86 horsepower and a five-speed “manual”. The Mobius II has a top speed of 120 kilometres per hour. The novelty will cost about 950,000 Kenyan shillings ($10,000).